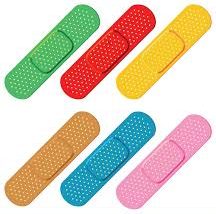 Whilst Vascular Surgery is driven by many new technologies, the simple “Band Aid” is also joining the 21stCentury. Wounds on the skin are usually treated with bandages that protect the area and keep it moist, but which don’t actively help to promote healing. A novel  mechanotherapy bandage has been developed that not only closes the wound, it actively reduces infections, and accelerates healing. The researchers at Harvard and McGill Universities have called these new dressings “active adhesive dressings” (AADs), and they believe that soon these may be coming to a pharmacy near you.

The new dressings are possible thanks to heat-responsive proteins that are strong and when heated, contract – actively closing the wound.  Since they’re also adhesive by nature, they stick extremely well to the skin.  The strength and effect of the dressing can be modified at the time of manufacture by adjusting concentrations of its components, allowing it to be used in a variety of clinical applications beyond household injuries, including trauma and acute events.

The researchers used PNIPAm, a heat-responsive polymer that starts to contract at around (32° C. It is water repellent and because silver nanoparticles are mixed into it during production, it is actively antibacterial.

In a study on pig skin, the material bonded to the skin at least ten times stronger than Band-Aids and kept bacteria from growing nearby. When tested on mouse skin, the new bandages were able to reduce the wound area by 45%. No inflammation or immune response was detected, which also gives these dressings low wound scarring potential.

Whilst still in clinical trials and it will be a while before you can buy these at the pharmacy, scientific and engineering advances can even make the simple “Band Aid” hi-tech!

Ponosh Vascular will be closed for the Holiday Season from close of business Wednesday 22nd December. We will ...

We are very proud to announce our new facial aesthetics clinic is coming to our specialist rooms very soon! Le...